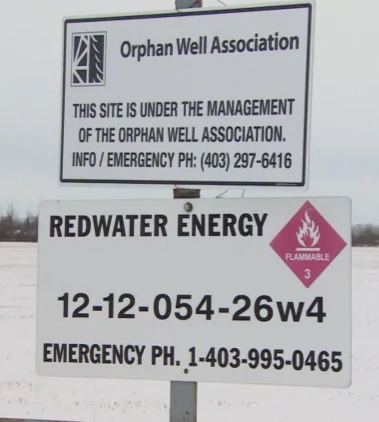 Old, unproductive oil and gas wells could cost up to $70B to clean up, says new report

Hustle in the oil patch: Inside a looming financial and environmental crisis – Investigation

Provincial governments / taxpayers have already paid $335-million to prop up the cleanup fund since 2014 after the previous oil and gas price crash.

The industry didn’t set enough aside during the many boom years when had record profits. The Alberta Energy Regulator for years have allowed producers including larger ones to sell many wells nearing the end of their life with huge cleanup liabilities to questionable companies that later declare bankruptcy and leave the cleanup fund and tax payers on the hook.

Last week the regulator appointed a new CEO, after three investigations concluded that the former chief executive officer and his top lieutenants tried to carve out a lucrative new business for themselves when they started a side project to provide regulatory training to other jurisdictions.

Tuesday’s bill will likely factor into a current investigation by Alberta’s Auditor-General Doug Wylie, who is looking at whether the regulator’s systems are sufficient for dealing with orphan wells and preventing the number of sites from increasing.

Archive of above Globe article.

This is an important matter of public interest.

The agency that oversees the clean-up and environmental reclamation of Alberta’s abandoned oil and gas wells will have broad new powers under legislation tabled by the provincial government Tuesday, setting the stage for long-awaited federal aid.

The government billed the changes as a way to boost employment in the energy industry and stem the growing problem of orphan wells, as the province struggles with environmental liabilities in the oil and gas industry that have climbed into the tens of billions of dollars.

Alberta Environment and Parks Minister Jason Nixon said Tuesday the ultimate goal of the bill is to protect and create jobs in the struggling energy sector as it deals with the onslaught of cripplingly low prices and tanking demand because of the COVID-19 pandemic.

“We’ve been clear we see this as a way forward for job creation in the coming months,” he said.

Mr. Nixon said his government is still pushing Ottawa for a cash injection on the orphan well file. He expects more information on those negotiations to be made public “in the coming days.”

Orphan wells and underfunded environmental liabilities – insufficient sums of money put aside for future cleanup obligations – present major risks to the industry and taxpayers. In Alberta, they are transferred to the industry-funded Orphan Well Association (OWA), which is in charge of decommissioning the sites.

But several corporate bankruptcies since oil prices crashed in late 2014 have caused the number of sites to balloon. An imbalance between the OWA fund and the number of wells on its books has seen successive provincial governments backstop the association to the tune of $335-million.

Bill 12, the Liability Management Statutes Amendment Act, aims to reduce the number of wells that end up in OWA hands in the first place. For example, it will allow the association to find new owners for oil and gas sites that are still economically viable, but have seen their owners walk away.

It will also allow the association to appoint insolvency professionals to try to offload wells to companies that can cover the eventual cost of reclamation. Government officials said the change means the OWA could effectively become a producer, but stressed that would be in extreme cases and the association would have to meet all regulatory requirements to do so.

The change also expands the OWA’s mandate to include pipelines and large oil and gas facilities. That means if a producer hands over the keys to a facility that’s key in provincial heating fuel supply, for instance, the OWA would have the ability to protect that site. The same would be true if a small pipeline operator goes bust, leaving other producers with no way to transport their product.

Mr. Nixon said the legislation is the first step in a broader overhaul of the Alberta Energy Regulator (AER), which is responsible for assessing and approving energy development.

Premier Jason Kenney’s government installed a new board and began a review of the AER last summer, saying it needed to be more responsive to the industry, partly by speeding up approvals. It then told the arms-length regulator to reduce its 1,200-person work force by 270 full-time-equivalent positions.

Last week the regulator appointed a new CEO, after three investigations concluded that the former chief executive officer and his top lieutenants tried to carve out a lucrative new business for themselves when they started a side project to provide regulatory training to other jurisdictions.

Tuesday’s bill will likely factor into a current investigation by Alberta’s Auditor-General Doug Wylie, who is looking at whether the regulator’s systems are sufficient for dealing with orphan wells and preventing the number of sites from increasing.

His office said Tuesday that audit is expected to begin in the next couple of months with the intent of reporting back to Albertans later this year or in early 2021.

I use my blog to write about things that I think are a matter of public interest or that I think others will be interested in
View all posts by Kevin Yaworski →
This entry was posted in Canada, international, justice, News and politics, Oil and Gas, Sustainability and tagged AER, Alberta, bankruptcies, BITUMEN, cleanup, corruption, Energy, environmental, fossil fuels, funds, gas, misuse, oil, Oil Sands, orphaned, reclamation, regulator, Sustainability, tar sands, tax payers, wells. Bookmark the permalink.