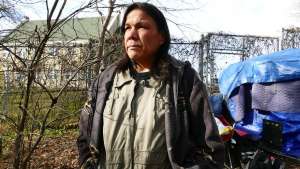 © Provided by Canadian Broadcasting Corporation Raymond Dunn lives in a tent in a neatly kept area behind Balmoral Hall, a private girls’ school a short walk from a homeless encampment along the Assiniboine River.

Raymond Dunn lives in a tent in a neatly kept area behind Balmoral Hall, a private girls’ school a short walk from a homeless encampment along the Assiniboine River.

It is a sad state of affairs for sure. Once the City, Prov and Feds forced to stop wasting so much on bloated bureaucracy, incompetence, unethical influence and corruption there will be more than enough public funds to deal with these and related issues properly.

Here is more info about the shortcomings of WHRA’s free needle and exch programs to say the least from fairly trusted source / journalist.
See part one and two of his investigations.
https://www.manitobapost.com/winnipeg-news/is-manitoba-housing-ground-zero-of-winnipeg-meth-epidemic-117450

As for the temporary shelters here is more info.

What was being done previously to reduce homelessness, serious crime and reign in soring policing costs was failing. All agreed somethings needed to change. The City, Province and community groups came up with some ideas.

One different strategy described in this article is now being criticized by some on social misleadia and other biased media. Previously people complained about high police OT costs and slow response to serious crime calls. Now that police are being treated less like social workers they complain about the temporary shelters staying up a bit longer.

I agree there is other areas to find savings and efficiency with police but lets give them a chance with this different approach. If there is a threat to public safety police are still the first ones sent.

I use my blog to write about things that I think are a matter of public interest or that I think others will be interested in
View all posts by Kevin Yaworski →
This entry was posted in Canada, healthcare, manitoba, News and politics, winnipeg and tagged drug use, exchange, free needles, homelessness, manitoba, meth, police, public safety, shelters, temporary, whra, winnipeg. Bookmark the permalink.