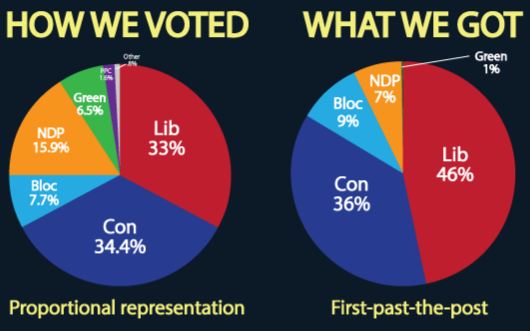 Here is how Canada’s federal election would have looked based on one proposed proportional representation model. Does the current first past the post model look fair to you?

The Liberal party promised during the 2015 election to reform it but reneged after a weak and misleading public consultation process. They said it would be very difficult and there wasn’t enough support to change it. Was it just a vote getting tactic?

The Greens and the Bloc gained the most support since last election based on % of the vote at least.

With nearly 69% voter turnout average and in MB. This is much higher than the last MB Provincial election (55%) and Winnipeg Civic election (42%). Still concerning that over 120,000 votes declined or rejected.

Also here is some responses by the parties from questions the MMF asked them. Apparently only the Conservatives didn’t respond. If this true and they were not focused on these issues and Indigenous Canadians it could be a large part of why they didn’t get more votes and seats.

Raw Data for Ballots per province. to Open image for link to xlsx file.

I use my blog to write about things that I think are a matter of public interest or that I think others will be interested in
View all posts by Kevin Yaworski →
This entry was posted in Canada, civil rights, manitoba, News and politics, winnipeg and tagged 2019, ballot, Bloc Quebecois, Canada, Conservative, Election, first past the post, green, Liberal, Manutoba, NDP, Party, proportional representation, Quebec, results, stats, voter, winnipeg. Bookmark the permalink.