Drug kickbacks: Caught on camera in Canada and in lawsuits in the US

Studies have shown that the practice of kickbacks or rebates for pharmaceuticals drives up the cost of generic drugs. (Room’s Studio/Shutterstock)

I believe healthy lifestyles and some proven alternative therapies can prevent and treat many illnesses but for others there is a need for proven pharmaceutical drugs.

Shams that give up to 70% kickbacks to many pharmacies small and large recently caught on camera by CBC Fifth Estate investigative reporters.

These illegal rebates have been exposed before in Ontario and Quebec in the past but not investigated and why are they not even illegal in Manitoba and elsewhere in Canada?

The US Federal and State Department of Justices and Governments have prosecuted and fined several big pharma corporations in the US for kickbacks and related crimes. With some success and some failures but they also looking at legislation to close the loop holes to reduce drug costs.

These costs are already considerably lower in the US compared to Canada for many drugs. Many people in Canada and elsewhere are directly affected or have family or friends that are. Health authorities in some jurisdictions can afford to offer life saving drugs but restrict or deny out of Province or State patients resulting in unnecessary deaths or shortened lives. If drugs were supplied without kickbacks and lower cost would more be available and covered?

In Jan 2017 the Canadian Minister of Health Jane Philpott vows to save Canadians Billions on drug prices yet very little has been done. Trudeau has since replaced her in a cabinet shuttle.

Watch the video below and or read the articles below for more info. If you are concerned contact your elected and appointed officials and health minsisters or equivalent at the federal and provincial or state level. 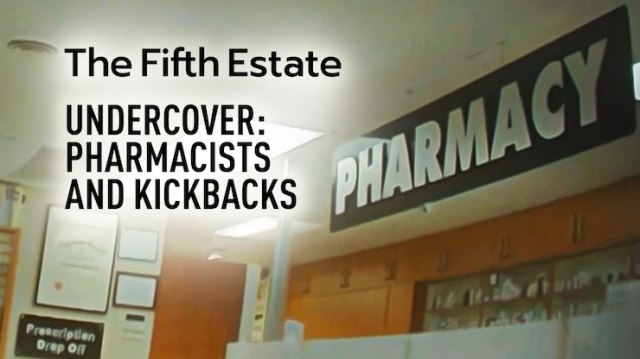 It’s illegal in Ontario and drives up the price of generic drugs across Canada. So why are pharmacists and Pharmacies taking what are called rebates, which are like kickbacks, from some of the the largest drug suppliers in the world? We went undercover to find out.

Several allegations of kickbacks against McKesson Canada which is a subsidiary of the U.S. McKesson Corporation, which is No. 6 on the Fortune 500 and the largest pharmaceutical distributor in North America. There has been several lawsuits in the US against them.
Guardian is one of McKesson’s independent retail pharmacy banners and Rexall is fully owned and operated by McKesson.

When Costco was caught demanding kickbacks, a document filed at a hearing of the Ontario College of Pharmacists alleged that other pharmacy chains were also potentially breaking the law.

…
“It’s not just Costco…. Every single pharmacy across the country takes kickbacks in a monetary form still to this day. I am a former rep and can definitely say that this happens. It is still happening and will continue to happen.”

Mark Ronayne was the lead investigator on two reports for the Competition Bureau of Canada in the mid-2000s that looked at competition practices in the Canadian generic drug sector and made recommendations for changes.

“Canadian taxpayers, consumers and businesses could save up to $800 million a year if changes are made to the way private plans and provinces pay for generic drugs. The potential savings could climb to over $1 billion per year in coming years, as several blockbuster brand name drugs lose patent protection.”

Ronayne believes “powerful interests” blocked change in Canada, which is why the practice of paying kickbacks continues to this day.

‘Greed is a powerful weapon’: Are illegal kickbacks in Ontario driving up the cost of your generic drugs?

Health minister vows to save Canadians ‘billions’ on drug prices

Canadians forced to pay some of the highest drug prices in the world could save billions through changes promised by Health Minister Jane Philpott in an exclusive interview with the fifth estate.

Kickbacks Not Apply? Your Hospital
The medical supply chain is a conflicted mess, and revoking its ‘safe harbor’ would save patients money.
Opinion
May 7, 2018

It says a McKesson subsidiary violated the US federal False Claims Act by selling the medication, providing kickbacks by offering the pooled drugs at a discount and repackaging them under non-sterile conditions. That left the drugs open to contamination that could have harmed patients, the lawsuit claims.

—
McKesson Medical-Surgical MediNet Inc. was found not guilty in kickbacks case. Did all the facts come out or was it a matter of who had the better lawyers?

I use my blog to write about things that I think are a matter of public interest or that I think others will be interested in
View all posts by Kevin Yaworski →
This entry was posted in healthcare, justice, News and politics and tagged Big Pharma, corporations, drugs, generic, illegal, kickbacks, large, mckesson, pharmaceutical, pharmacies, pharmacists, rebates, Rexall, small. Bookmark the permalink.

1 Response to Drug kickbacks: Caught on camera in Canada and in lawsuits in the US