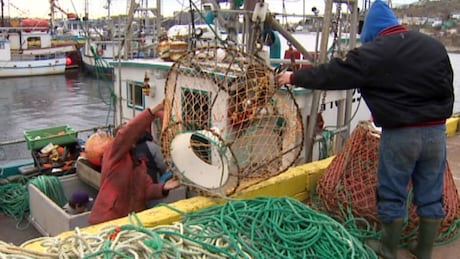 Falling plankton numbers is another blow for fisheries like crab and shrimp, which have been in decline. (CBC)

Archive below including some comments from Captain Paul Watson of the Sea Shepherd Conservation group and others.

Senior DFO scientist says the cause of the collapse is unknown

Falling plankton numbers is another blow for fisheries like crab and shrimp, which have been in decline. (CBC)

They’re teeny, tiny plants and organisms but their impact on ocean life is huge.

Phytoplankton and zooplankton that live near the surface are the base of the ocean’s food system. Everything from small fish, big fish, whales and seabirds depend on their productivity.

“They actually determine what’s going to happen, how much energy is going to be available for the rest of the food chain,” explained Pierre Pepin, a senior researcher with the Department of Fisheries and Oceans in St. John’s.

Pepin says over the past three to four years, scientists have seen a persistent drop in phytoplankton and zooplankton in waters off Newfoundland and Labrador.

“Based on the measurements that we’ve been taking in this region, we’ve seen pretty close to 50 per cent decline in the overall biomass of zooplankton,” said Pepin. “So that’s pretty dramatic.”

Measuring five millimetres or less, phytoplankton contain chlorophyll to capture sunlight and use photosynthesis to turn it into chemical energy, which is later eaten by ocean creatures. (Photo courtesy of DFO)
Scientists say local testing reveals half the amount of plankton in a square metre of water today. It’s not just a problem here, declining plankton numbers are a global phenomenon.

It’s a difficult idea to convey to the average person who might not understand the ocean ecosystem, but Pepin likens it to walking into a grocery store and instead of seeing the shelves full, they’re only half-full.

Listen to Jane Adey’s coverage on CBC Radio’s The Broadcast:
The base of the ocean food chain is in trouble

Alarm bells are going off
So what’s causing this dramatic decline?

Scientists here haven’t detected anything in particular that can be linked to the plunge in productivity, but they are worried.

“When it persists — for in our case now for three or four years — in the back of my mind, at the very least, little alarm bells start going off because it means that something fundamental may have changed in the food web.”

Pepin says it is difficult to understand how long it takes the effect of this lack of basic food to make its way through the ocean ecosystem.

Scientists have to advise managers on how to handle fish stocks but without clear evidence of causes and effects, it becomes a very difficult job.

“How do we act on this? This is a real challenge.”

I have been saying for years that our Ocean is dying.

My words consistently fall on deaf ears. This article today states that plankton is disappearing and scientists do not know why?

Actually scientists not in the employ of the Canadian Department of Fisheries and Oceans do know why. I know why.

Since 1950 we have seen a diminishment of phytoplankton in the sea of between 20 and 40% depending on regions.

Phytoplankton is the foundation of all life on this planet providing up to 70% of the oxygen we breathe in addition to being the base for the entire oceanic food chain.

Why is phytoplankton being diminished.

1. Because we are killing off whales that provide the nutrients of iron and nitrogen needed by phytoplankton. Every day one Blue whale defecates 3 tons of whale manure, rich in the essential nutrients needed by phytoplankton.
2. Diminishment of marine mammal and sea bird populations.
3. Diminishment of fish populations from excessive over-fishing.
4. Pollution – chemical, plastic, sonic and radiation.
5. Human overpopulation. Excessive consumption. Excessive human greed.

The world needs to shut down industrialized fishing and all longlines, gill nets, purse seine nets and trawl nets need to be banned.

We need to give the sea the time to heal the damage we have caused.

The absolutely most important issue today for the survival of humankind is phytoplankton.

If we do not stop this diminishment we will all die. Civilization will collapse and there will be no future for humanity and millions of other species.

When the Ocean dies, we will all die!

FUN FACT – Plankton provide about 70% of the oxygen humans breathe, welcome to what happens when the Global Temperature rises 2 degrees.

This only happened once before and it killed 98% of all life and is the only known mass extinction of insects.

Don’t believe me? Many paleontologists think this is what caused the Permian extinction. This is the extinction event where so much biodiversity was lost, the recovery of land-dwelling life took significantly longer than after any other extinction event, possibly up to 10 million years.

Do some research yourself. If the Oceans biosphere collapses, so does most of the life on earth.

We as a species are causing the largest, the most accelerated extinction of life on this planet, and it will only end with us.

If you want to do something that has ANY effect – Sorry but you need to stop buying products, instead fix them, reduce your carbon footprint, stop having children & grow your own food.

Sadly if everyone did this our global and nationalized capitalistic paradigm will collapse. But at least we all might have some time to think of solutions to this problem, and maybe who is to blame and who should foot the bill. Because if history shows anything – it wont be the richest, it will be your children & the poorest.

I use my blog to write about things that I think are a matter of public interest or that I think others will be interested in
View all posts by Kevin Yaworski →
This entry was posted in Nature, News and politics, Sustainability. Bookmark the permalink.