Bitcoin’s fall could just be getting started

Posted on December 1, 2018 by Kevin Yaworski 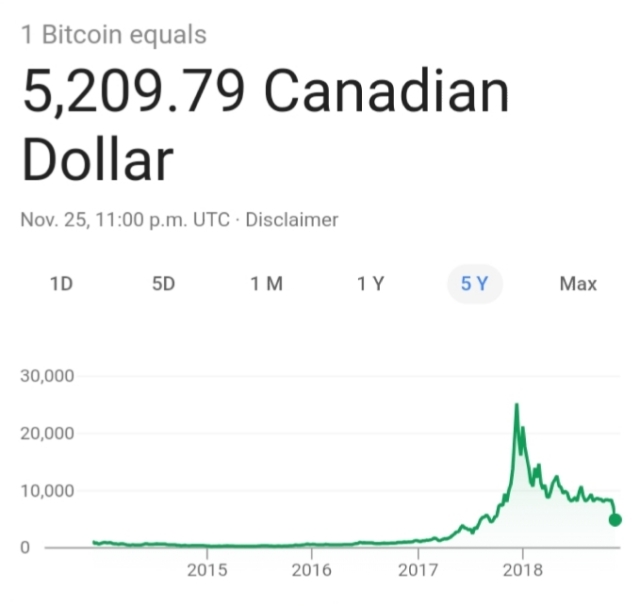 One of my favourite horror sites is the Bitcoin Energy Consumption Index, published by digiconomist.net. If you care about the environment, avert your eyes because the data are unpleasant.

The never-ending global process of “mining” bitcoins, supported by blockchain technology, consumes horrendous amounts of electricity. At last count, the servers that run bitcoin’s software were using as much electricity as all of Romania and only slightly less than Bangladesh, whose population is almost five times greater than Canada’s.

The power consumed by a single bitcoin transaction could power 18 American homes for an entire day, the index says.

The currency’s carbon footprint is atrocious, especially in countries such as China, where coal is burned extensively to make electricity. Bitcoin is the top cryptocurrency and by far the industry’s biggest power consumer among the digital currencies. But there are more than 2,000 others, each of them sucking away at the power grid.

If you need another reason to consider bitcoin and the other cryptocurrencies loathsome, here’s another: They’re crashing, big time, confirming the skeptics’ belief that they were bubble assets and, in spite of their precipitous fall, probably still are.

Bitcoin was released as an open-source software in 2009 and then traded at a fraction of a cent. A year later, the first known bitcoin transaction happened when a bitcoin miner in Florida bought two Papa John’s pizzas for 10,000 bitcoins. Prices over the years were highly volatile, but the general direction was up, then way up, to the point the line on the price chart went vertical last year. By December, bitcoins were going for almost US$20,000 apiece, giving them a total market value of about US$320-billion, equivalent to the gross domestic product of Denmark or Ireland.

It’s been downhill ever since. By late January, the price had halved. In the past week, bitcoin, at its low, almost touched US$3,500 before rallying somewhat to reach US$4,000. Since its peak, bitcoin has lost 80 per cent of its value. The top 100 cryptocurrencies’ collective value is now about US$130-billion, according to coinmarketcap.com. Early this year, they were worth more than US$500-billion. That’s a real collapse and cryptocurrency haters, among them the prominent economist Nouriel Roubini, thinks zero is their appropriate value.

Why the fall? There are dozens of theories with varying degrees of credibility. One is that bitcoin and its rivals, including XRP, ethereum, bitcoin cash, stellar and EOS, simply went too high too fast, to the point they were defying gravity. No asset (if you can call bitcoin an asset) in the history of assets has been able to sustain such sharp increases. The best killer of high prices has always been high prices, as investors in tulips, the South Sea Co., oil, gold, silver, Japanese real estate and dot-com stocks have learned at various times over the ages. In recent weeks, tech plays have been getting roughed up – Apple’s value has fallen by US$200-billion since October – but none worse than bitcoin.

But the what-goes-up-must-come-down theory, while annoyingly dependable, doesn’t explain why cryptocurrencies might have a lot further to fall even though a global army of “miners” has every incentive to keep the price up.

Other factors behind the currencies’ collapse is, apparently, investors’ fear of regulation. It’s coming, partly because lawmakers everywhere fear the decentralized and largely anonymous nature of bitcoin makes it ideal for money laundering and the purchase of illegal drugs and weapons. The Silk Road online black market – where bitcoin was used for all transactions – and its successor were shut down by the FBI a few years ago. China has banned cryptocurrencies, Britain charges a tax on gains in cryptocurrency investments and Colorado, among other jurisdictions, is cracking down on initial coin offerings that it considers potential scams.

Some bitcoin investors also apparently fear the central banks will issue their own digital currencies, a concept being openly discussed by Christine Lagarde, managing director of the International Monetary Fund. Prof. Roubini thinks the idea has merit, all the more so since central bank-backed currencies would probably crowd out the cryptocurrencies.

My own view is that bitcoin and its brethren are doomed because they share few of the characteristics of traditional money. Bitcoin’s many fans argue that the currency cannot be devalued away because it is not backed by a central bank and is, therefore, not subject to inflationary whims; over the long term, it can be a better store of value. The counterargument is that a currency of such notorious volatility – bitcoin can rise or fall by double-digit amounts in just a day – represents a lousy store of value since the price is so clearly subject to speculative buying and selling.

But the real reason bitcoin and the others are doomed is that you can’t use them to settle tax arrears. Governments can’t force its citizens to use the national currency for private payments – people can use orange peels if they wish – but governments can force them to use the national currency to meet tax obligations. “The tax (and the corresponding ability to enforce payment) is what gives an otherwise worthless piece of paper with pictures of dead presidents on it its value,” market analyst Marshall Auerback said in AlterNet report earlier this year.

So let’s add it up. Cryptocurrencies are environmental disasters. They are volatile and have no intrinsic value. They are not backed by governments and might never be – why would they be willing to give up their currency monopolies? They can’t be used for tax payments. Other than that, they’re fine and a lot of fun if you’re a speculator.

I use my blog to write about things that I think are a matter of public interest or that I think others will be interested in
View all posts by Kevin Yaworski →
This entry was posted in News and politics and tagged bitcoin, China, coal, crypto, currency, electricity, Energy, mining, Sustainability. Bookmark the permalink.