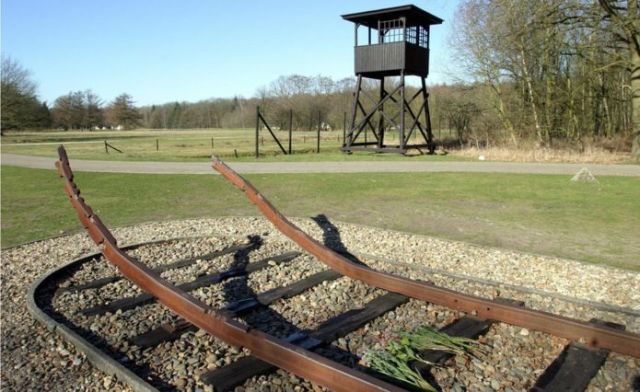 The Netherlands’ state-run rail company NS has agreed to set up a commission to compensate Holocaust survivors and their relatives for transporting Jews to a Nazi transit camp.

Its decision to “learn, honour and remember in an enduring way” followed a campaign by Salo Muller, whose parents were murdered at Auschwitz.

Some 107,000 Jews were taken to Westerbork and deported, mainly to deaths camps at Auschwitz and Sobibor.

NS said it had decided to avoid a legal battle, years after French rail company SNCF was ordered to pay compensation for its role in deporting 76,000 French Jews during World War Two.

SNCF eventually apologised for its role in 2010, and later agreed a compensation fund after US lawmakers threatened to bar the state-run company from rail contracts.

NS has already apologised in the past for its role in helping the Nazi occupiers in World War Two and has contributed to the renovation of the museum at Westerbork.

What was Dutch railway’s role in deportations?

NS said in a statement on Tuesday that it had operated trains on behalf of Germany’s Nazi occupiers , describing it as a black page in the history of the company and country.

But it did more than just run the trains.

“The NS complied with the German order to make trains available,” Dirk Mulder from the National Westerbork Memorial told Dutch TV last year. “The Germans paid for it and said the NS had to come up with a timetable. And the company went and did it without a word of objection.”

NS made an estimated €2.5m (£2.2; $2.8m) in today’s terms, Dutch public broadcaster NOS estimates, in transporting Jews from across the Netherlands to the Westerbork camp.

Who is Salo Muller?

In 1941, when he was five, his parents were arrested by the Nazis and put on a train from the capital Amsterdam to Westerbork, where they spent nine weeks before being deported to Auschwitz and murdered.

He decided to act when he heard that the French government had agreed a $60m compensation fund with the US to be distributed among thousands of survivors and their relatives.

After a number of meetings with NS chief executive Roger Boxtel, the company decided a commission would be set up to work out how to compensate survivors and immediate family.

“I don’t think I would have dared dream of this outcome,” he told Dutch TV in an emotional interview. “For me it means that the NS recognised that this pain has not gone. The grief is still there for very many Jewish people.”

More on this story

I use my blog to write about things that I think are a matter of public interest or that I think others will be interested in
View all posts by Kevin Yaworski →
This entry was posted in News and politics and tagged Auschwitz, camp, company, compensation, death, Holocaust, murdered, Netherlands, rail. Bookmark the permalink.