The conservative lobbying firm that Facebook hired in the midst of an October 2017 public relations crisis about Russian disinformation included what one former employee told NBC News was an “in-house fake news shop” as part of its operations. Facebook’s ties to the lobbying firm, Definers Public Affairs, were first reported by us on Wednesday here […]

Delay, Deny and Deflect: How Facebook’s Leaders Fought Through Crisis

Nov 14 2018 – The New York Times
Facebook has gone on the attack as one scandal after another — Russian meddling, data sharing, hate speech — has led to a congressional and consumer backlash.
Credit Tom Brenner for The New York Times 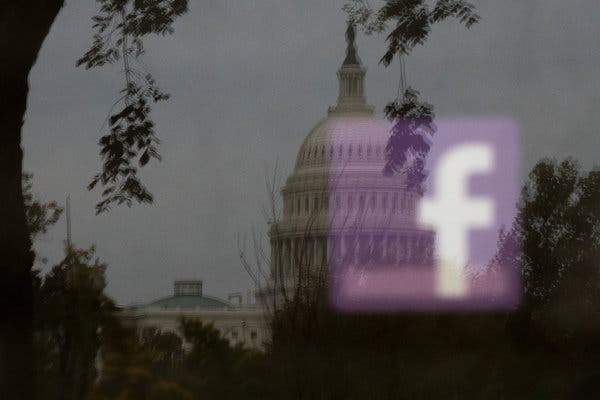 A Facebook logo reflected on an advertisement board outside the United States Capitol in Washington in October. Facebook had initially hired Definers Public Affairs, a consulting firm, to monitor news about the social network.CreditCreditTom Brenner for The New York Times
—

Nov 14 2018 – The New York Times
—
Archive of NBC News coverage of this below
—
Related articles on Facebook, Analytics, Data Harvesting, Privacy Breaches, Manipulation of the public etc…
Can this tech pioneer convince you to delete your social media accounts?
** Important msg for all Facebook group or page admins and mods and warning to other FB users ***
Is Facebook and other apps using your “smartphone” Camera without you knowing?
Social Media and Internet Monopolies Manipulating the Masses
Privacy and big data
The power of algorithms and big data as well as the dangers – Weapons of Math Destruction
Silicon Valley faces reckoning as backlash grows against Big Tech
Why is Facebook suggesting I join “LGBT = Liquor Guns Bacon And Tits” Private Group?
—
Archive of NBC News

The conservative lobbying firm that Facebook hired in the midst of an October 2017 public relations crisis about Russian disinformation included what one former employee told NBC News was an “in-house fake news shop” as part of its operations.

Facebook’s ties to the lobbying firm, Definers Public Affairs, were first reported on Wednesday in The New York Times, which detailed how the group aimed to “discredit activist protesters [of Facebook], in part by linking them to liberal financier George Soros,” who has become the subject of widespread right-wing conspiracy theories for his philanthropy work.

The report resulted in widespread criticism and accusations of hypocrisy by Facebook for its use of a lobbying firm that pushed narratives on behalf of its clients disguised as news articles. And some of the firm’s more inflammatory political ads for other clients were removed by Facebook itself for violating its advertising policies.

Definers runs a website called NTK Network, which has a verified page on Facebook with more than 120,000 followers that publishes and promotes articles about the firm’s clients as well as their competitors.

A former employee of Definers, who asked not to be identified in order to protect professional relationships, told NBC News that NTK Network was “our in-house fake news shop.” Some clients would actively pay for NTK Network’s positive coverage, which the ex-employee said would then be pushed out through Facebook in the hopes of being picked up by larger conservative media outlets such as Breitbart.

One article currently being promoted on Facebook through NTK Network’s page promotes the page as having “the latest stories without the liberal bias,” according to Facebook’s publicly available ad index.

The former employee told NBC News the company would run positive stories about clients “at the end of the day” simply to “fill up space” on NTK Network’s website and feed, even if they didn’t specifically pay for NTK’s suite of services through Definers.

NTK is currently running an ad to promote a story published on Tuesday headlined “Conservatives Blast ITC Judge’s Ruling on Apple,” which refers to a patent dispute between Apple and Qualcomm. The former employee claimed Qualcomm had a relationship with Definers.

The revelation highlights how public relations firms like Definers have been able to move beyond efforts to seed stories in the press on behalf of their clients and can now promote their own articles on Facebook in the guise of news, just as Russia promoted misinformation and divisive political rhetoric through disguised media publications. And now it turns out that Facebook was not just the platform for this kind of opposition work, but had actually hired a practitioner to do so on its behalf.

“After a year of increasingly worrying revelations about the scourge of misinformation on Facebook, it is still shocking to learn that Facebook itself employed the same tactics that bad actors have used to exploit its platform,” Justin Hendrix, executive director at NYC Media Lab, a university consortium focused on media technology, said.

“How can we ever trust this company?” Hendrix said. “It is apparently more willing to use misinformation tactics than to seriously police them.” Facebook pushing back on allegations that they misled the public

The ex-employee said that Facebook hired the firm to research opponents of Facebook following its problems with Russian disinformation. A current employee at Definers, who asked not to be named as they are not authorized to speak on behalf of the company, confirmed that Facebook began its working relationship with the firm in October of 2017.

Within the first month of their working relationship, positive coverage of Facebook on NTK Network’s site was already up and running. On Oct. 31, one NTK headline stated: “Russian Content on Facebook Amounted to Just .004% of Total Content.” The article echoes statements delivered to Congress by Facebook general counsel Colin Stretch, who appeared before the Senate Judiciary Committee in October 2017 to talk about Facebook’s role in the Russian disinformation crisis before the 2016 U.S. election.

The site’s positive coverage of Facebook, with no discernible negative content, continued for months, including a story headlined: “Facebook VP: Russian Goal Was to Divide, Not to Swing Election.”

Last month, while the social media giant was still working with Definers, Facebook removed some of NTK Network’s political ads for violating Facebook’s advertising policies, including one with the headline: “Are These Liberal Billionaires the Biggest Threat to Americans’ Second Amendment Rights?”

Other NTK Network ads attacking Democrats from earlier in 2018 were removed for “running without a ‘Paid For By’ label,” according to Facebook’s ad database.

Patrick Gaspard, president of the Open Society Foundations, the nonprofit group funded by Soros, called for Facebook to explain its actions.

“Your methods threaten the very values underpinning our democracy,” Gaspard wrote in a letter addressed to Sheryl Sandberg, Facebook’s chief operating officer. “I would appreciate the opportunity to discuss this matter with you in person, and to hear what steps you might take to help remediate the damage done by this deeply misguided — and dangerous — effort carried out at Facebook’s behest.”

“The New York Times is wrong to suggest that we ever asked Definers to pay for or write articles on Facebook’s behalf — or to spread misinformation,” Facebook wrote in its statement.

“Definers did encourage members of the press to look into the funding of ‘Freedom from Facebook,’ an anti-Facebook organization,” the company statement said. “The intention was to demonstrate that it was not simply a spontaneous grassroots campaign, as it claimed, but supported by a well-known critic of our company. To suggest that this was an anti-Semitic attack is reprehensible and untrue.”

Definers received a $3.3 million contract in the first quarter of 2018 from Facebook, according to government documents.

Facebook did not respond when asked if the company was aware of NTK Network’s existence, or its role in seeding news coverage that attacked clients’ enemies and pushed client narratives on its platform, while the companies worked together.

I use my blog to write about things I find interesting or that I think are matter of public interest.
View all posts by Kevin Yaworski →
This entry was posted in Computers and Internet, News and politics, Privacy and tagged Definers Public Affairs, disinformation, Facebook, hypocrisy, Internet, Mark Zuckerberg, mislead, misleading, PR, Privacy, Public Relations, russia, Trump. Bookmark the permalink.