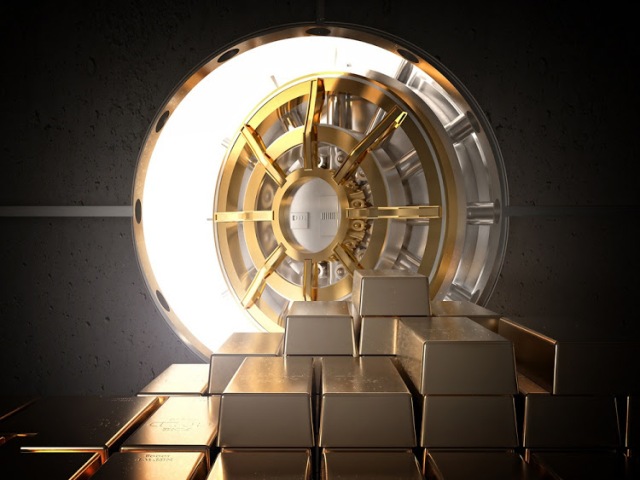 Canada has been selling off its gold reserves for a while now and is at or close to zero. In the 60’s it had over 1000 Tonnes. It’s reserve is now made up in currency and similar forms.

Yet countries such as Russia, India and China are currently bolstering their gold reserves. Central banks added 336 tonnes to their reserves in the second half of last year, a 25 per cent increase from the previous year, the World Gold Council says.

Canada is the only G7 country with less than 100 ounces of gold in its reserves.

It appears Canada officials have been and are betting on stability of the global economy and major currencies or bailouts from the World Bank and its G8 partners if not. Is that a wise choice?

Gold fluctuates as new discoveries, production increases and demands change. Canada is invested in US treasuries and other major currencies from stable countries for its reserve to reduce this risk.

Many financial experts disagree with the policy to sell off as gold has significantly out performed the other assets over the long term. Is not having gold in Canada’s financial reserves put its currency and ability to secure its debt at risk? Many think Canada should keep some gold especially when the US, Russia and China have so much and China buying more and more. The UK sold a significant amount and has been criticized (aka Gordon’s Bottom).

After this a consortium of central banks, led by the European Central Bank (ECB) and the BOE, signed the Washington Agreement in Sept 1999, limiting gold sales to 400 tonnes per year for the next five years. That agreement was renewed in 2004, and again in 2009.

There has been many social media posts and some news claiming the Trudeau led government has sold over three tonnes of gold since elected in 2015.

Canada has had a policy to sell gold and buy more easily traded assets since the 70’s to better diversify its reserves. Canada also has large amounts of gold in the ground on Crown land albiet not at hand and costly to extract.

These and other false, misleading and divisive posts and news are used to manipulate the public, divide and distract them from the bigger issues.

Some of the comments from the CBC site

“They have replaced the gold reserves with 49 billion in US dollars, and the US buys the gold, and who owns the country”

“But that’s no longer the case, since no major world economies still value their money tied to the gold standard.”…gold is STILL classified in trade as monetary and non monetary. the fact that we have a finance debt allowing this sell off and sell out to happen is a travesty ,criminal and WILL come back to haunt the sovereignty of the country in years to come.

Ottawa sells off almost all its gold reserves, leaving just 77 ounces — or less

And Then There Was None: Canada Sells its Gold

I use my blog to write about things I find interesting or that I think are matter of public interest.
View all posts by Kevin Yaworski →
This entry was posted in Financial, History, News and politics and tagged bullion, Canada, currencies, gold, reserves, world. Bookmark the permalink.