Allegations of sexual assault against Hedley and response from several organizations 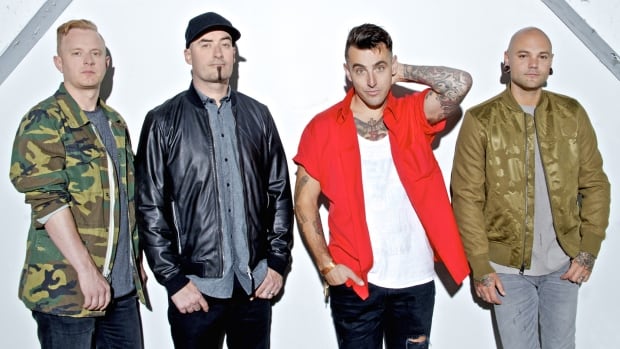 Many Hedley fans remain supportive as the band continues on tour while facing sexual misconduct allegations. On Friday, the management team for the pop-rock quartet severed its ties with the band. (Universal Music Group)

—
Many Hedley Cageless tour ticket holders are not sure about going to the concert anymore or have already decided not to go. Some have go refunds from Ticket Master.
This after allegations including predatory behaviour, sexual assault, sex with underage girls, giving date rape drugs, rape and reports of a police investigation that was dropped after the underage victim or family did not want to assist with investigation.
I figured I should look into this before giving my opinion and because a family member has purchased tickets. They initially said they were only allegations not proven but have since said they have concerns now after more serious allegations have surfaced.
People should decide on their own so am just passing what info I found from both sides of the story regarding the allegations and responses from several organizations involved with Hedley including Ticketmaster.
I pasted what I found online including link to the twitter account collecting and releasing most of the allegations.
—

Canadian band called allegations ‘unsubstantiated,’ said there are ‘2 sides to every story’

Feb 16, 2018 8:57 PM CT Last Updated: Feb 16, 2018 9:21 PM CT
http://www.cbc.ca/news/canada/manitoba/brandon-hedley-concert-allegations-1.4540242
Some of this article
…
A flurry of claims were made by anonymous users on Twitter who alleged inappropriate encounters with the band, which the band has called “unsubstantiated.”
…
One fan attending a concert said ultimately decided she would still attend the Brandon concert with her niece — who is a young adult — as planned.

“One of the main things is that I do believe in the process of law, that you should be innocent until proven guilty,” Mortensen said in an interview on CBC Manitoba’s Up To Speed. “But I soul searched because there isn’t a really good mechanism for items such as this to go through that process.”

She said the allegations speak to the issue of how society deals with accusations of sexual misconduct in general.

“The pendulum against the victims was stuck for a really long time and now it’s been released and it’s swung, and maybe it’s swung too far. I don’t know,” she said.

…
—
More on the allegations:
The person who started collecting and releasing stories sent to her about Hedley. Read them here: https://twitter.com/_cndnpsycho
Most allegations are about creepy behavior but some are very serious including predatory, un-consensual sex, sex with minors, giving date rape drugs and rape
—
As of Feb 15th or earlier someone posted online:
Here is what we know so far:

– One report says Hedley withdraws from Juno’s but CBC reported
the Juno awards cancelled the band’s scheduled performance.
– BOTH of Hedleys management teams drop them

– The Embassy release the story from interviewing venue manager who describes something that is very disturbing if true involving an underage girl and allegations of her being drugged and rapped by a band member while the other members blocked the door.

https://exclaim.ca/music/article/hedley_were_investigated_for_allegedly_drugging_underage_concertgoer
– Both opening bands leave the tour (Neon Dreams and …)
Shawn Hook is out
– CBC Radio stops playing or promoting them
– End of a promotional deal with Air Miles, and charitable organizations that had previously worked with Hedley distancing themselves from the quartet
– On Thursday, Corus Radio said it suspended airplay of all Hedley music on 30 stations across Canada.
Still sound like just allegations? #outHedley2k18 #hedley #timesup

—
Other claims that:
“These organisations don’t want to stick around for the backlash if this is true. Its all about image these days and with these allegations coming up left right and center for quite a few celebs a lot of management doesn’t want to deal with it. Doesn’t mean what’s going on is true.”

“When a woman was accused of being a witch, their own family would back away and watch them burn even if they were innocent. The mobs would burn anybody who stood by them. It’s like the millenniums version of Salem.”

“Arguably the biggest thing is the band’s statement was not an outright denial other than there was always a line they never crossed. I mean, that’s the detail that can’t be negated by the Salem analogy.”

Even when the witches denied that they were witches, unless they could offer proof, they were still burned.
—
Apparently Ticketmaster is offering refunds for Hedley tickets.
I was not able to find an official response from Ticketmaster but several ticket holders have reported they were able to get refunds.
Contact: Ticket Master Fan Support @TMfanSupport

.@TMfanSupport is refunding all @Hedleyonline tickets for #CagelessTour. Send them a message explaining why you want refund and include your order number and they will give a 100% refund. Thank you TM for doing this

8:38 PM – 15 Feb 2018
dm @TMfanSupport or @TicketmasterCA on twitter and explain your reasoning for wanting a refund. they’ll ask for your order number and last four digits of your card. if it’s a VIP package, they have a special number to call, and once again explain the circumstances

I use my blog to write about things that I think are a matter of public interest or that I think others will be interested in
View all posts by Kevin Yaworski →
This entry was posted in justice, News and politics and tagged allegations, cbc, Corus, Date Rape Drug, Embassy, exclaim, Hedley, innocent until proven guilty, Junos, justice, Rape, Sexual Assault, Social Justice, Ticketmaster, trend in behavior, unfounded. Bookmark the permalink.