There are numerous issues with the new way the Province of Manitoba is trying to “streamline” the processing of traffic tickets (alleged offences). We wanted to outline some of the issues. This is on top of how they and the City of Winnipeg already streamlined how parking and now 700 other bylaw alleged offences handled. Combined up to 300,000 traffic and parking alleged offences being issued per year in Winnipeg and trending up.
1 – No Right To Appeal
The new law says you have no right to appeal and have to ask for permission (leave). This is troublesome because the Manitoba Courts have had a clear history of avoiding issues and this just gives them an easy way to not even have to hear the case. Previous to the change, you had a right to appeal to Queen’s Bench from Traffic Court and if you wanted to have a further appeal to Court of Appeal, you had to ask for leave. At that time, the Court of Appeal continually dismissed leave requests typically on the basis that traffic tickets are not important enough of an issue. There are some insane rulings that even though the decisions are clearly wrong, Court of Appeal has refused to hear an appeal on the basis that they don’t consider it to be a societal concern to sort out. That certainly gives no justice to the individuals and is now going to be the way Queen’s Bench can refuse to consider the issues. Even though the law says you can ask for leave, the history has been, they don’t grant it for traffic tickets and there’s no reason for that to change.
While there have been decisions from Queen’s Bench that Court of Appeal refused to sort out, there are even more that came out of Traffic Court and did get sorted out in Queen’s Bench. Here’s a few examples:

-The photo radar program was not putting serial numbers on the testing certificates. We argued one of these and Traffic Court continually upheld the certificates as not having to comply with the rules. That was eventually overturned because somebody appealed it to Queen’s Bench.

-Traffic Court was repeatedly ruling that speed limit signage is not required in Manitoba. That got overturned in a QB appeal.

-Traffic Court also was refusing to hear the arguments that Know Your Zone was illegal. It only got exposed because at that time, there was a right to appeal.
The new law now allows them to give unjust decisions in Traffic Court with no right of having it reviewed in Queen’s Bench. The decisions since then have been getting worse. We argued a case last month where they forbid us from arguing the case even though the law said we could. They just said they weren’t going to allow it. The ruling was illegal but there’s nothing that can be done about it.

2 – The Officer No Longer Has To Be In Court
There is no longer a right to face your accuser. That is a major problem considering how many problems there are with the testimony that was given in the past. Here are a few cases that relied on the interviewing of the officer:
-In Know Your Zone, even though Traffic Court gave the wrong ruling, it was because of the right to interview the ticket officer that the fact there were no signs was able to be established. Had this not been on the record, the outcome may very well have been different in QB. KYZ would never have been exposed had there been no requirement to produce the officer or right to appeal.
-In a Grant case, the photo officer was eventually exposed for lying about the presence of speed limit signage. It was only because of the right to question him that it got exposed. 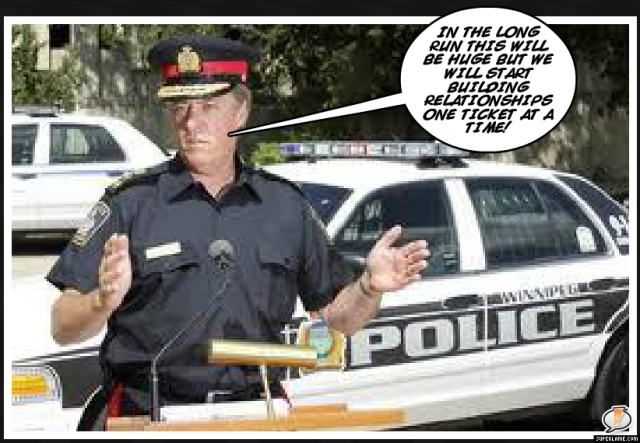 -The police write illegal tickets for not stopping for 3 seconds at a stop sign. There is no such law and cross examination is needed in order to establish that fact. Otherwise, the officer could just write that the sign was disobeyed and the pertinent details would never come out if the officer doesn’t have to come to court.
– We witnessed a case in 2015 where the officer’s entire story was exposed for being contrived. It was only revealed because the motorist had the right to interview him.
Under the new system, the officer can just write that the offence occurred and that is enough for the courts. There were already so many problems when the officer had to face questioning. Now, it’s even worse when they won’t be interviewed and then compare that to the confidence that Traffic Court will have knowing there is no right to appeal their decisions.
3 – No Requirement to Serve The Ticket
Under the old law, they were required to prove you got the photo ticket. Things get lost in the mail and now you are legally deemed to have known about something you never got. We don’t have to explain further how wrong that is.
4 – Fees For Not Showing Up
If you plead not guilty and don’t show up, they tack on another $50. That would be on top of $50 they would tack on if you didn’t get the original ticket. That ticket already includes a $50 justice fee so now you’re looking at $150 added to what was already the highest fine in the country. This new fee makes no sense. You have the right to a trial and if you don’t show up, they get to convict you anyways in your absence. If anything, that makes for an easy case for them. In theory, you could show up and take up hours of court time and have no added fee or miss it and have them dispose of it in 1 min and then add the fee. This is even more egregious considering that no cop or photo officer is in court anymore either. We had a case last month where they sent the lady the wrong court date. She went at the time she was told to and there was no court. They then default convicted her for not showing up at the real time and added $50 for her not showing. When she went in and showed them that they sent the wrong time, they said it didn’t matter and upheld it. That is illegal but it is another example of how much worse it is getting with Traffic Court’s new confidence that comes from knowing you have no right to appeal them.

There are many more problems including the aggressive enforcement of known, created and dangerous signage and other engineering deficiencies but we’re sure those four alone are enough to show how much more unjust this system has gotten. It really is an entire attack on the principals of our legal system such as “innocent until proven guilty”, the “right to face your accuser” and the “right to make full answer and defence” People need to be made aware of how abusive this is getting otherwise it will keep getting worse. This is and has undermined public confidence, trust and respect for police, government and the judiciary (Courts).
The Province has the responsibility and authority to deal with these very serious issues but is not only ignoring but taking deliberate steps to make them worse in return for a 50% share in the traffic $afety, parking and bylaw fine revenu

The past NDP and current PC Majority parliaments have gotten away with this because the strong Premier model and rushing legislation through with little to no due diligence, public consultation or debate.

Many in the legal industry, law society and judiciary are turning a blind eye to abuse of the public as they benefit from litigation, legislation and charter court challenges etc… Justices and Lawyers make much more than many professions. There has already been many allegations, formal complaints and some convictions of colluding between lawyers and with police to create more litigation and related corruption.

The POA, MBEA and amendments to HTA and related legislation, bylaws and policies are clearly against public interest and arguably unconstitutional. The fact they include that you can still subpoena the officer or operator and other bits added may make some feel better but collectively the changes go against many of the fundamentals of our justice principles and I am sure the highest courts will agree but that takes time and money which are at limited supply. In the mean time the public, economy and society is being abused and paying the price for the few that benefit.

Much more detail and what can be done about it here:
http://www.wiseupwinnipeg.com
Pinned post and links within at
http://www.facebook.com/groups/WiseUpWinnipeg

I use my blog to write about things that I think are a matter of public interest or that I think others will be interested in
View all posts by Kevin Yaworski →
This entry was posted in justice, News and politics and tagged $afety, 3rd party, acs, allegations, appeal, appointed, city of winnipeg, conduent, corruption, courts, deficient, elected, engineering, for profit, mobile photo radar, officials, Photo Enfocement, photo radar, poc, police, Province of Manitoba, provincial offences court, safety revenue, scc, Summary Convictions Court, traffic, winnipeg, WPS, xerox. Bookmark the permalink.