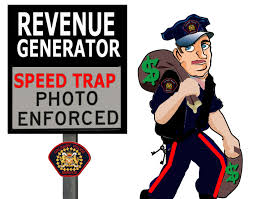 There is overwhelming and verified evidence that Photo enforcement and some traditional traffic enforcement is more than just a revenue generation tool.  It is unlawful taxation as fines, proven repeatedly by independent academic and verified studies to NOT improve safety and in most cases reduces it.  It takes already heavily taxed funds from the public and out of economies as well as puts undue hardship on those that can least afford it.  Worse yet it is often resulting in less police resources directed towards preventing, investigating and solving serious crime and building stronger community relationships. It is resulting in loss of public trust in Police, Government and Courts.  All this is having huge social and economic impacts.  Very few elected and appointed representatives and other senior officials are willing to look at the this or past the next election.

Only a few politicians and retired officers have spoken the truth about photo enforcement.  If politicians do it is usually when they are in the opposition.  In MB the only politicians I am aware of are the Honorable MLA Jon Gerard and a few past Mayor Candidates including Robert-Falcon Ouellette who is now an MP.   It is time for more of them to speak out and for the public to demand their MLA’s and Councillors bring this up in Parliament and City Council.

Here are more examples of this abuse and some of the politicians and retired police officers that are speaking out against it.

Alberta, Progressive Conservative leadership candidate Jason Kenney called the photo enforcement “an abuse of the power of government” in an interview with the Edmonton Journal.

“Look, who is kidding who?” Kenney said. “We all know what’s going on. We all know there are municipalities using this as a revenue-generation tool.”

More on this story here:

Retired RCMP officer calls photo enforcement operators vultures and calls out the politicians that allow them.

I use my blog to write about things that I think are a matter of public interest or that I think others will be interested in
View all posts by Kevin Yaworski →
This entry was posted in News and politics and tagged cash cow, cash grab, Edmonton, manitoba, photo enforcement, photo radar, Quebec, unlawful taxation as fines, winnipeg. Bookmark the permalink.