Posted on September 13, 2016 by Kevin Yaworski
Sept 13 2016 – Kevin Yaworski – WiseUpWinnipeg – http://wp.me/p1fJaD-pZ
Important info about many of the alleged traffic offenses being issued in Winnipeg including some new information about contesting unfair or unlawful tickets, delay motions (charter 11b – unreasonable delay), discovery package (disclosure) and more.

Lets work together to stop the mistreatment of the public, and misuse of public funds, valuable justice system resources and related misuse.

Finally more and more people have stopped accepting false and misleading info being fed to them by senior people with ACS, G4S via some of our elected and appointed officials and senior staff at WPS, WPA, City Hall and the Province.

Their focus and efforts need to be redirected ftom trying to collect more of your hard earned and taxed the heck out of already money to where they spent only what is actually needed. Many of you are at or past the boiling point when seeing how much the public is paying some of our leaders to manage the City, Province and some of the SOA’s or Crown corps on their behalf and the huge impacts their focus on $afety revenue and other unfair or unlawful taxation / revenue at any cost is having.

Here is another must read if you want to learn more about this and contest unfair or illegal tickets which will help others see the facts and stop taking these $afety meds.

More and more are getting informed that the vast majority of up to 300k traffic and parking offenses being issued in Winnipeg every year have been shown to be unfair or unlawful due to breach of the HTA or other legislation: policy or bylaw requirements, missing; confusing; contradicting or improperly installed signs, artificially reduced $peed limits by city council, city controlled and dangerously $hort amber time especially for higher speed intersections and some other intersections, other deficient engineering, wrong offense code and other issues.

These artificially reduced limits and amber times, missing signs and other engineering deficiencies are not compliant with national engineering standards created to better protect the public.

These deficiencies are against recommendations from some city engineers and reports, against the law in Ontario and elsewhere and in many documented cases being created or ignored in Winnipeg by or with direction from Transport Mgr Luis Escobar, Deputy Mayor; PW chair; Counc. Janice Lukes, COO Michael Jack and other senior officials at the City and the Province.

If this test is successful it will be a big media story and should force them to stay all traffic offenses unreasonably delayed by 4 – 6 months or more. If not then we need to test once the transition period is over (not sure how long that is) ** The hearing is coming up soon so Stay Tuned!

When you file the application a hearing is scheduled with a Judge (e.g.at 408 York) to see if the delay motion will be heard and if they agree it is scheduled (if the application meets all the requirements why not deal with it at once? seems like a waste of valuable Justices and Court time and other court resources).
For more info on filing an application for delay motion see the WiseUpWinnipeg pinned post. 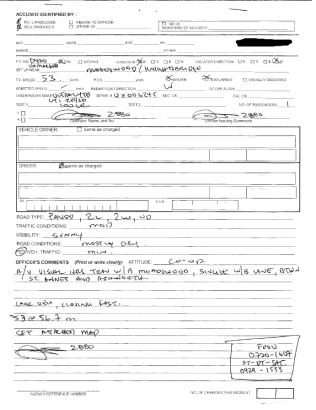