Rick Friday holding the cartoon that got him fired from Farm News as well as a copy of the newspaper. Credit KCCI

Original Article below by By CHRISTINE HAUSER -NY Times – MAY 5, 2016

I hope this guy starts a crowd funding page or  finds a lawyer who offers to take them to Court.  Then gets an unbiased Justice who awards him the option for his job back plus compensated for legal costs and time off work since being wrongfully fired.  Appeals if not then takes the money and says piss of I don’t want to work for you smucks.
I am including his cartoon because some links circulating online are getting taken down.
I picked the NY Times as I would think they have enough integrity and financial backing to say no to influence.
https://www.nytimes.com/2016/05/06/business/media/cartoonist-fired-from-farm-news.html
Archive of the NYTimes article below.
Related:
Alberta Crown trying to use law found to be Unconstitutional to silence political speech on social media plus important cases not being reported to the disadvantage of the general public
Some Food Safety, Health, Environmental Protection and other regulations are benefiting special interests groups, putting the public at risk and have already caused harm
Why is our food being modified by the worlds largest herbicide producer
Why has Monsantos been banned in many countries but not in the US, Canada and else where? 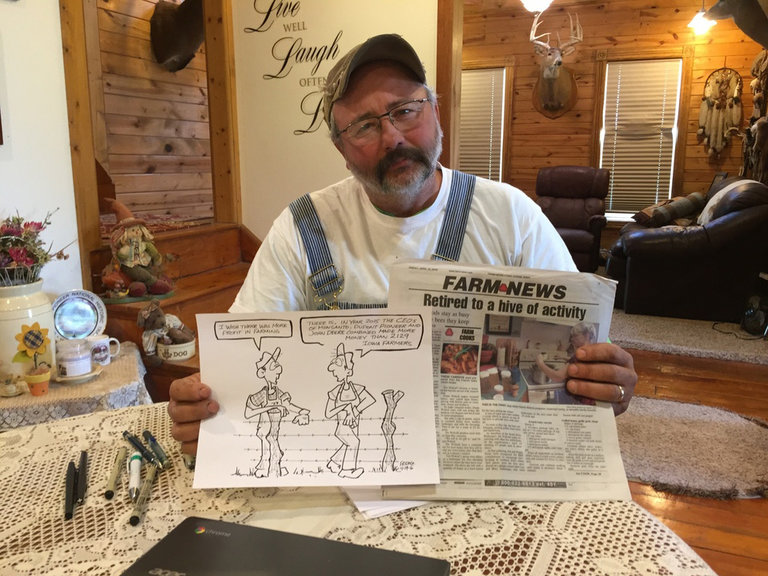 Rick Friday holding the cartoon that got him fired from Farm News as well as a copy of the newspaper. CreditKCCI

Rick Friday was not immediately available on Wednesday to explain why he was fired after two decades working as a cartoonist for Farm News. That is because he was feeding the cows on his Iowa farm, as he does early every morning before most people have gone to work.

But the cartoon that got him into trouble last week had already spoken for him, circulating online well beyond the audience of the thousands of Farm News readers of his weekly “It’s Friday” column, which has been published since 1995.

The cartoon shows two farmers, in overalls and skewed baseball caps, chatting at a fence.

“I wish there was more profit in farming,” one farmer says.

“There is,” the other replies. “In year 2015 the C.E.O.s of Monsanto, DuPontPioneer and John Deere combined made more money than 2,129 Iowa farmers.”

After the cartoon was published last Friday, Mr. Friday said he was told in an email from an editor the next day that the cartoon would be his last for Farm News because a seed company had withdrawn its advertising in protest.

For Mr. Friday, 56, the termination came as a shock. He has not only lived the farm life since he was a child, but has also used it as his muse in illustrations for just as long. He is a self-taught artist who picked up a No. 2 pencil when he was growing up on a 300-acre livestock and grains farm in Lorimor, Iowa. As a child, he sold sketches to other children on the school bus for a nickel or a dime.

So when he was contacted by a reporter on Wednesday after he posted the news of his firing on Facebook and it was picked up by local media, Mr. Friday had a good reason for not being able to chat right away. It was still early, before 9 a.m. Iowa time, and he was being interrupted while feeding corn to the animals on his 200-acre cattle farm.

When he paused to talk, he revealed he was leaning against a fence, and the heifers were staring at him, hard.

“They are going, How come you are not feeding me right now?” Mr. Friday said. “And I have got some bulls around the corner that are patiently waiting for me to feed them, too.”

“I am a little bit behind, because my phone has been ringing off the hook.”

He agreed to talk after the cows were fed.

Later, Mr. Friday, who sometimes answers to “Ricky,” (which is what the older women in town call him) said that the rural life had inspired the 1,090 cartoons he had drawn in pen in the 21 years he had been illustrating his Farm News column.

As with the others, he had sketched the offending cartoon at his kitchen table. Then, as always, he scanned it, emailed it off to an editor and asked for confirmation that it had been received. It had been.

Usually, Mr. Friday said, he receives a reply with typical editor feedback. An apostrophe goes here or a word is spelled wrong there, he said. But the cartoon was published online, with little else said.

But on Saturday, an email from a news editor landed in his inbox. Mr. Friday, quoting the email, said that the cartoon “had caused a storm here” and that “in the eyes of some, big agriculture cannot be criticized or poked fun at.”

He was told his run with the Farm News, for which he said he had been paid “embarrassingly low” wages on a freelance basis, was over, per instructions from the publisher.

Farm News is read in print and online by 24,000 households in 33 Iowa counties, according to its website. On Wednesday, a woman who answered the phone at the company said, “No comment” when asked about the end of the publication’s relationship with Mr. Friday. Calls to Farm News’s publisher, The Messenger in Fort Dodge, Iowa, were not returned.

Mr. Friday said he had never intended to make fun of anyone. He said that as an editorial cartoonist, he was illustrating news. The plight of farmers was evident last year, when commodity prices took a dive, he said.

“We are kind of dictated what our wages are going to be somewhat on the stock exchange,” he said.

Asked why he had singled out Monsanto, DuPont and John Deere, Mr. Friday said he wanted to illustrate the differences between what a year in agriculture can look like for individual farmers and big agribusiness. He said he drew his inspiration and research from a report in The Des Moines Register and from whatever he could find on the Internet about the salaries of the chief executives of those companies.

“In agriculture, you need chemicals, herbicides, seed companies and equipment,” he said. “I just used reputation. It was not trying to pick on anybody in this industry; it is just common knowledge.

“The point of my cartoon, and I hoped that it would be self-explanatory, is that one farmer said he wishes there was more profit — and who wouldn’t?” he added.

“But someone complained about it, and this is the philosophy I use when I explained it to my children: They were being fed by two hands,” Mr. Friday said, referring to Farm News and its relationships with him and with its advertisers.

“They knew they had to chose one, and they chose the hand that they knew would hurt the least,” he said. “After 21 years, that is what really bothered me.”

Monsanto said it had no role in the decision to fire Mr. Friday. It said that it first heard about it when The Des Moines Register wrote an article on May 2.

“This is not the first time we’ve been the subject of a joke or political cartoon and it probably won’t be the last. It is much easier to laugh at ourselves than it is to stifle humor,” the company said in a blog post.

I use my blog to write about things that I think are a matter of public interest or that I think others will be interested in
View all posts by Kevin Yaworski →
This entry was posted in Education, News and politics and tagged Dupont, Elites, Freedom of Press, freedom of speech, John Deer, Monsantos, Multi-nationals, Pioneer. Bookmark the permalink.